As many other girls like me, I always used to think that there were monsters hiding in the vast darkness outside my room at night. These monsters frightened me so much that I would have trouble falling asleep due to my irresistible urge to watch this monster infested darkness in case something were to emerge from it and attack me. I grew up and lost all imagination and became obsessed with the tangible, factual world. By the time I was 14, my spark was back and I actually had depth. I thought about interesting things and imagined more monsters. These monsters were different. The monsters were my friends. I became obsessed with finding comfort in the darkness.  Maybe my weird comfort in usually scary things makes me relate to my idol, Grimes, or maybe it’s just a coincidence, but if you enjoy weird things, scary looking creatures, bright colors, macabre themes, and girly stuff, check out my GrrlCrush: Grimes.

“I like creating beauty out of scary things” – Grimes

Grimes is a 27-year-old Pisces from Vancouver, Canada. She is petite, vegan, and is recognized for having unnatural hair color. Her musical style is very electro-synth-experimental-dreamy-pixie like/kick ass. Her videos usually include gruesome elements paralleled with stereotypically girly elements. Her lyrics are harsh, radical, and all out there. In an interview before her last album came out she told Spin that “There are a bunch [of songs] from the perspective of a vampire mobster character, which I’m now concerned about because I’m realizing if people think the words are from my perspective, they might think I’m insane.”

Though always sharing a mutual “I-don’t-give-a-shit-vibe” I fell in love with grimes after watching her video for “Flesh without Blood” from her most recent album Art Angels. To begin with, her lyrics perfectly convey the feelings of a girl who had recently screwed over by someone they thought they loved yada yada blah blah blah. (at least for me):  “You hate, you bite, you lose/ After all, I just don’t like you/ It’s nice that you say you like me/ But only conditionally/ Your voice, it had the perfect flow/ It got lost when you gave it up though/ ‘Cause you want money/ You want fame/ I don’t see the light I saw in you before/ And now I don’t, and now I don’t/ And now I don’t care anymore.”

The visuals in this video spoke to my heartbroken/slightly psychotic 17-year-old mind. While watching the video, I found solace in her unusual indulgence in dressing up and jumping on beds with other girls, while simultaneously playing in blood and angel wings.  She captures all emotions in this video. She screams. She dances. She sings. She throws money.  And she wears a purple wig. What more could I want?? Her hysterical self-expression soothes my irrational fits of laughter and uncontrollable decisions. I don’t know the meaning behind these decisions and, truthfully, I don’t want to. I don’t want to ruin the excitement I get from this video and song. The video for Flesh without Blood is followed by the video for Grimes’s song “Life in the Vivid Dream;” a sequel involving murdering a doll and lots of fake blood. I don’t know.

Grimes is truly a beautiful human. Her most recent album proved this to be true. She designed all the artwork herself and delayed the release of Art Angels on vinyl because she wanted it’s packaging to be made completely out of recycled materials. She deserves respect from those who don’t necessarily even like her music. She is a hard working artist who makes all her own music.

Remember that monster living under your bed? He’s still there. Try to talk to him/her (use your monster’s preferred pronouns.) Your monster might be different now. I talked to mine and realized he has actually been there to protect me all these years from realistic threats. Grimes would be proud. 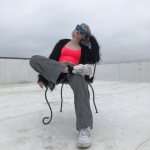 About the Author Patsy Detroit is an 18 year old Aries with fire in her soul. She spent her childhood performing at Playhouse on the Square, Hutchison, and MUS. She is very passionate about equality and creative expression. She will be studying theatre and film next year at Hunter College in NYC. Hopefully, she will continue to make videos and post way too much on instagram.