“What should we do for dinner?”

“I picked last night. It is your turn.”

If you’re anything like my boyfriend and me, you know this conversation all too well. Deciding where to eat is the root cause of all of our arguments. Somehow, something as simple as deciding what to eat is the cause of so much drama and deliberation.

After months of perpetuating this unhealthy routine we realized how truly detrimental it is to our health and wallets. As a result, I decided to stop this nasty habit cold turkey.

On top of my decision to stop eating out, I also decided to try veganism. I learned to cook back when my boyfriend was a die-hard vegetarian, so most of my cooking knowledge does not involve meat. As a result, it was easier to go without animal product than to learn how to cook various meats at home. I also knew one of the major components of my unhealthy diet was my addiction to cheese and milk. I decided to cut those out and fully embrace a vegan lifestyle (for a week).

I started my “diet” by laying a few rules. Ultimately, I decided I would still get my daily tea from my local coffeeshop, but that would be the only product I would purchase. Moreover, I decided that in order for my diet to succeed, I needed to start exercising.

Exercise is something I’ve never really gotten into. I’ve taken a few classes here and there, but nothing ever really stuck. Now that I am in college I’ve found it hard to find an exercise routine that works with my time and budget. So, I decided my only real option would be running.

Surprisingly, I loved it. Unsurprisingly, I sprained my ankle after a week. I quickly learned that there is a lot more to running that just putting on certain shoes and bursting out the door. I got a little overzealous, and I ended up with a slight injury. After talking to my dad, a long-time runner, I learned some healthy ways to ease into running.

As my diet is concerned, I found it surprisingly easy to avoid eating out. What was the most difficult was adjusting to smaller portion sizes.

Looking back, I was baffled at how much restaurants enabled me to eat. Portion sizes tend to be excessive, which is particularly scary since you really don’t even know what is going into your food.

Ultimately, this is what I loved the most about cooking at home. Even though the portions were smaller, I felt more in control of my diet. I knew exactly what would go into each meal. If there was an ingredient I didn’t like, I didn’t have to eat around it. Instead, I could just avoid using that ingredient altogether.

Additionally, throughout the week I learned the importance of snacks. The human body was not made to eat three big meals each day. Instead, we should be snacking periodically and drinking plenty of water. This week has fostered my love for hummus and illustrated the power of almonds. Instead of mindlessly reaching for chips, I focused on healthy options that would actually cure my hunger and not stall it.

I learned a lot this week about myself and my diet. I never went into this experiment with the goal of losing weight. Instead, I wanted to be more mindful of what I’m putting into my body. Any weightloss was just a happy accident.

I think that calorie counting and addictively stepping on the scale are counter productive. As a result, I discourage everyone from participating in those activities.

Instead of downloading MyFitnessPal to lose weight, I recommend just paying attention to what you’re consuming. Make an effort to eliminate the bad habits and replace them with the good. You’ll be amazed by the results. 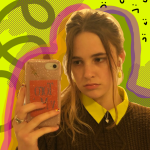 About the Artist Layna's favorite color is pink. She has never broken a bone and can lick her elbow